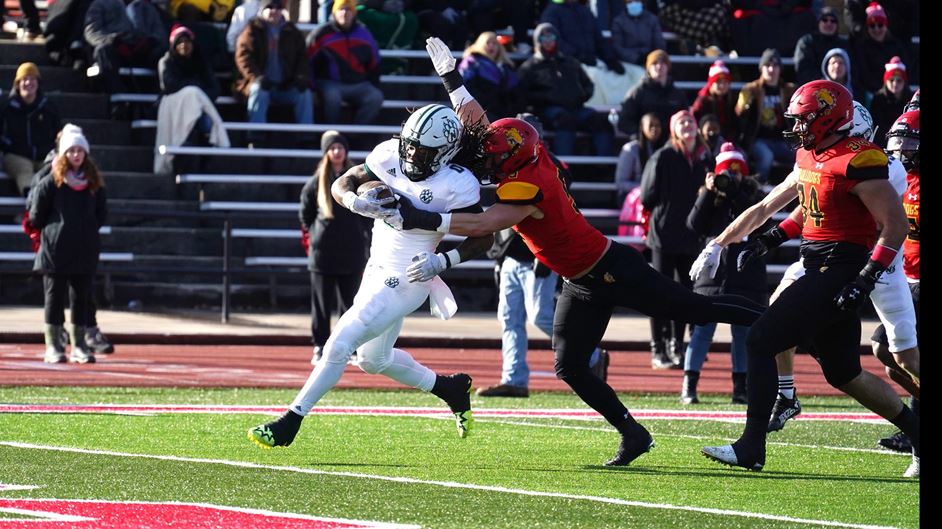 Northwest Missouri State's season came to a close in the quarterfinal round of the NCAA Division 2 Playoffs with a 41-20 loss to No. 1 Ferris State Saturday afternoon in Big Rapids, MI.

The Bulldogs (12-0) scored on the opening drive of the game and led wire-to-wire en route to their third straight win over the Bearcats (11-2).

Northwest punted on its first possession of the game, and trailed Ferris 7-0 when the offense go the ball back. Aided by a 65-yard pass to Trevon Alexander to put the Bearcats deep in Bulldog territory, Braden Wright put Northwest on the scoreboard with a 19-yard touchdown pass to Jamar Moya. Ferris State's lead was trimmed to 7-6 after the extra point was no good.

The Bulldogs punched in touchdowns on two of their next three drives to open a 20-6 advantage. Northwest battled back on a short field. Imoni Donadelle raced down the field for a 53-yard kickoff return putting the ball at the FSU 40 yard line. Two plays later, Al McKeller rushed into the end zone from 31 yards out to bring Northwest back within seven points.

Ferris State put up another touchdown before halftime to take a 27-13 lead into the break. They tacked on another score in the third quarter and early fourth to put the game out of reach at 41-13.

McKeller finished the day with 74 yards and a touchdown on 16 carries.